[Kids] Pics from a wild campaign

Pics from a free-for-all ongoing campaign, played mostly by my 5 year old and myself... 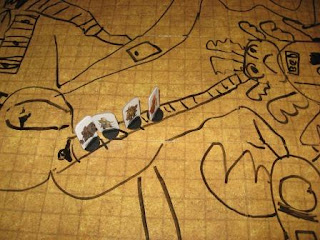 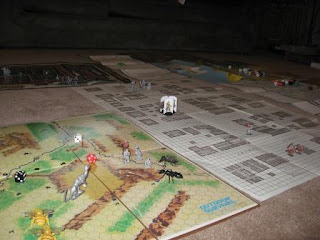 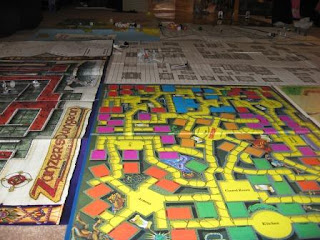 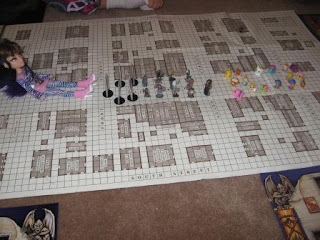 Take my word for it, that party (my PCs and hirelings) in the middle of town may be large, but they're in for a world of trouble.  If you don't think that giant is scary, you have no idea what you're talking about :).  Tough DM -- she is DM, I am GM and player.  She runs the monsters and has final say in the collectively developed narrative flow.  I take care of mechanical things.

The ultra-lite combat system:
Each side rolls 1d6 for initiative.  The side rolling the higher number goes first.  Tied rolls mean simultaneous actions.  A roll to hit is made with a d20.  The GM determines the number needed to hit (most often between 10 and 15), based on capability of the attacker and armor/capabilities of defender.  Rolling this number or higher results in a hit.  When a successful hit is made, the target is entitled to a saving throw to escape defeat (no hp used).  The GM determines a number between 1 and 5 based on the toughness of the defender.  This number or less must be rolled on a d6 by the defender in order to avoid defeat.  A defeated combatant is not killed.   Usually they are captured and teleported to a jail somewhere in a dungeon, from which they may be recovered later.  No using any books or writing anything down (disrupts immersion).

Waaaayyy more role playing than roll playing, believe me. And it's mostly not about combat, but parleying, planning, plotting, sneaking, magic, discussing, story-telling, interacting, acting, and so forth.

Unburdened by thoughts of rules systems and this and that, some of the things she comes up with are just great.  Pure imagination.  Reminders to me of some the best things about rpging, especially the boundlessness.
Posted by landlord dombrowski at 4:52 AM